“Happiness makes up in height what it lacks in length.”
——Robert Frost

The magic and serendipity that I witnessed last week on my research trip to Charleston, South Carolina, was of such joyful intensity that I am reminded of a Robert Frost poem, “Happiness Makes Up in Height What It Lacks in Length”:

O stormy, stormy world,
The days you were not swirled
Around with mist and cloud,
Or wrapped as in a shroud,
And the sun’s brilliant ball
Was not in part or all
Obscured from mortal view—
Were days so very few
I can but wonder whence
I get the lasting sense
Of so much warmth and light.
If my mistrust is right
It may be altogether
From one day’s perfect weather,
When starting clear at dawn
The day swept clearly on
To finish clear at eve.
I verily believe
My fair impression may
Be all from that one day
No shadow crossed but ours
As through its blazing flowers
We went from house to wood
For change of solitude.

I daresay that the intensity will not come my way again for some while, and, perhaps that’s a good thing:  I’m wired enough already!

This week we’ll apply our close-reading strategy to The Humourist’s essay of January 8, 1754.   You might want to click on the link and take a moment to revisit the essay.

Actually, this is one of my favorite “essays” from the collection, if, indeed you can call letters to yourself essays.  Yet, for the first time, The Humourist shows that he can be humorous.  Consider, if you will, the fact that he has disguised his identity under the pseudonym “The Humourist.”  And then he dares come forth with a letter beginning, “The HUMOURIST to himself, Greeting:”, followed by two more letters written to himself, though signed as “TOM SPRIGHTLY” and “IGNOTUS.”

To say that he’s stretching pseudonymity is an understatement, yet I find it amusing.

I find equally entertaining—albeit rather dated for us moderns—the story that he shares about his grandfather who was “reading the Latin Motto of a Book the other Day, and with great Vehemence and Extasy cried out, Oh! ’tis a noble Thing to be well versed in Greek!”

He’s clever as well in wordplay, as one of his correspondents writes about some Trials at the Old Bailey and notes “Yesterday the above Malefactors were hang’d at ‘Tyburn.'” The Humourist then questions, “Whether the Prisoners being made up of Men and Women, the latter can, by any reasonable Arguments, be proved to be Male-factors.”

To be certain, the humor in this essay is subtle, but it’s there, nonetheless, and we have not seen it before.

I am intrigued as well by the statement at the beginning of the essay that “you are a Man of Penetration, and can, with surprising Discernment, see a Church by Day-Light.”  Until last week’s research trip, I didn’t know what to do with that comment.  Now, however, having had access to the Last Will and Testament of the person I have identified as the Humourist, I understand.  He owned property and had a home on what is now Meeting Street, and, indeed, he would have been able to see St. Michael’s Church at the corner of Meeting Street and Broad Street. 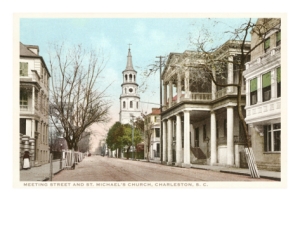 This strikes me as a rather significant clue.

Finally, a new Humourist dimension emerges in this essay.  I noted in an earlier Controlled Revelation that The Humourist was a bibliophile.  I find it interesting in this essay that he shows his knowledge of children’s literature.  He mentions “Jack the Giant-Killer,” an English fairy tale from the early eighteenth century.  Also, he mentions The Circle of the Sciences, a series of “instructional books for young boys and girls. The books were edited/published between 1744-1748 by John Newbery, considered to be the “Father of Children’s Literature.”  He was so important to the creation and marketing of children’s books that the American Library Association awards the Newbery Medal annually for the most important children’s book published in the previous year.

Week by week, The Humourist.’s profile (like his Aerial Mansion) is becoming “fitted up,” and before the end of summer it will be complete!

2 thoughts on “Controlled Revelation #5: A Man Who Knows Humor, Who Lives Near a Church, and Who Knows Children’s Books”