My Humourist post for today noted my location:  Sullivan’s Island.  It noted as well that Edgar Allan Poe was at Fort Moultrie on the western end of Sullivan’s Island for thirteen months and while there gained the inspiration for his story “The Gold Bug”—a story about a beetle that leads to a buried treasure!

Great!  So, that’s how I started my day.  Afterwards I went to the Charleston County Public Library to research wills and plats.  More on my findings tomorrow or the next day.  Let me tell you, though, that I have but one word to describe what I found:  PHENOM!  Stay tuned.  You will be as stunned as I was/am!

And so we did.  We biked.  Mindless.  Mindlessly.

Toward the end of our trip, and, indeed, just a stone’s throw from our “home away from home,”  we spotted the most spectacular tree that either of us had ever seen in our lives.  We nearly fell off our bikes at the same time!  We stopped, drop dead.  And, just as we were gawking, a woman walked down the driveway that led to the house behind the tree.

“What a spectacular tree,” I exclaimed.  (Of course:  she knew that already!)

“Yes.  It’s on the Historical Register.”

I didn’t know. To me, it was just a drop-dead, spectacular tree.

“Yes,” she said.  “This is the Gold Bug Tree.  But It wasn’t quite this big when Poe wrote his story.  It’s grown a lot.”  She smiled—a big wide Southern smile, full of pride. The Gold Bug Tree, right there in her yard. Right there, in front of her home. Right there, in front of me.  Right there in front of me—a tree that I had read about but not a tree that I had ever in my wildest imaginations expected to see!  I had no idea that such a tree ever, ever, ever existed!  And here I stood, drop dead in front of it, admiring it without even knowing its literary significance.

“Oh, my!” I stammered, stuttered.  “How strange.”  I continued stammering, stuttering. “I write a blog, and my post for today mentioned that I was staying here on Sullivan’s Island where Poe gained his inspiration for writing ‘The Gold Bug.’  Wow! I’m so glad that you were here as we biked by!  The Gold Bug Tree.  I’m stunned. Just stunned! The Gold Bug tree!  If you hadn’t been here, I woudn’t have known.  I would have just thought that this was such a spectacular tree.”

She walked back up the driveway leading to her home behind the famous tree.

We biked back to our less famous rental home on Station 28, and then we returned to The Gold Bug Tree at Station 27.  Without a doubt:  we had to take pictures.

Two photos follow: one of the tree; the other, the corner marker where the tree reigns with commanding magnificence! 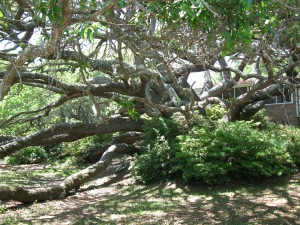 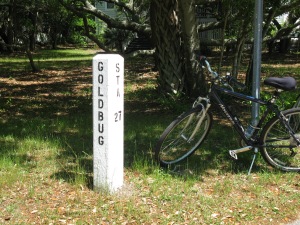 I have but one word:  Serendipity!

And, of course, let me tease you with the passage from Poe’s “The Gold Bug”:

“Jupiter, by direction of his master, proceeded to clear for us a path to the foot of an enormously tall tulip-tree, which stood, with some eight or ten oaks, upon the level, and far surpassed them all, and all other trees which I had then ever seen, in the beauty of its foliage and form, in the wide spread of its branches, and in the general majesty of its appearance.”

4 thoughts on “Serendipity on Sullivan’s Island”